A new monster storm has formed around the South Pole of Jupiter. 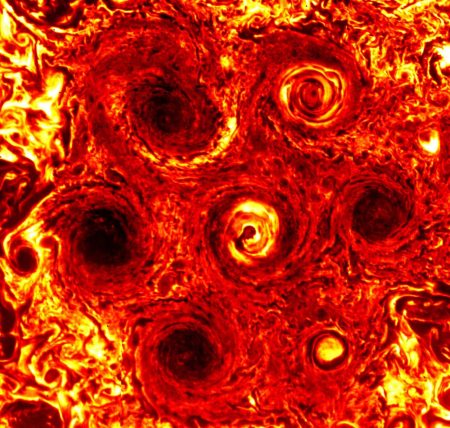 ‘When Juno flew over the planet’s south pole during its fourth perijove (closest approach to Jupiter, not counting the very first one when the spacecraft maneuvered into orbit around the planet) on 2 February, 2017, it saw something unexpected: A cyclone over 5,000 km across right over the pole, surrounded by five other cyclones ranging from 5,600 to 7,000 kilometers across! Not only that, the five cyclones were arranged in a pretty decently regular pentagon.

It’s bizarre. But now things have gotten bizarrer. On its last pass (Perijove 23) on 3 November, 2019, it delivered another big surprise: A sixth cyclone has joined the other five surrounding the pole!’

93 thoughts on “Nothing’s Real But Love”