In the last article I asked ‘Who Are You ?’ and the answer has come back ‘Anima’. Looking within is not for the faint hearted.

‘The anima and animus are described in Carl Jung’s school of analytical psychology as part of his theory of the collective unconscious. Jung described the animus as the unconscious masculine side of a woman, and the anima as the unconscious feminine side of a man, each transcending the personal psyche. Jung’s theory states that the anima and animus are the two primary anthropomorphic archetypes of the unconscious mind, as opposed to the theriomorphic and inferior function of the shadow archetypes. He believed they are the abstract symbol sets that formulate the archetype of the Self.

In Jung’s theory, the anima makes up the totality of the unconscious feminine psychological qualities that a man possesses and the animus the masculine ones possessed by a woman. He did not believe they were an aggregate of father or mother, brothers, sisters, aunts, uncles, or teachers, though these aspects of the personal unconscious can influence a person’s anima or animus.

Jung believed a male’s sensitivity is often lesser or repressed, and therefore considered the anima one of the most significant autonomous complexes. Jung believed the anima and animus manifest themselves by appearing in dreams and influence a person’s attitudes and interactions with the opposite sex. A natural understanding of another member of the opposite sex is instilled in individuals that stems from constant subjection to members of the opposite sex. This instilment leads to the development of the anima and animus. Jung said that “the encounter with the shadow is the ‘apprentice-piece’ in the individual’s development … that with the anima is the ‘masterpiece'”. Jung viewed the anima process as being one of the sources of creative ability.’ 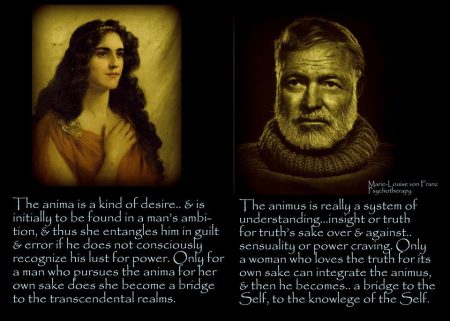 And being my own best subject. When I was young I went to a normal day school with boys and girls and I remember the first girl I was attracted to was called Rose. And then I was sent to a boys private school with no girls. I was christened Francis but it is a slightly girly name as there is Frances as well. At the school we called each other by our surnames but from time to time I was slightly teased about having a girl’s name. And I remember writing to my mother saying call me ‘David’ which was my second name and my father’s name when she wrote to me. And when I returned home in the holidays Rose had moved which now seems symbolic. At my second boarding school we used first names and my friends called me Frank which I thought was great and it has stuck ever since. It sounds masculine.

How this will play out I have no idea in the physical reality. It is saying my or our anima and animus are joining. We seem to be looking at ‘I am your mother, your daughter and your sister’ and ‘I am your father, your son and your brother’ on asteroids. And as Roob said, when it first came up in 2014 ‘And Grandmother’ which is in there as well. ‘Daisy Daisy’. For a long time there has always been a sense of looking for my lost sister but it’s saying I am in her and at the same time she is in me which in this reality is difficult to comprehend.

And healing the separation is not for the faint hearted either. It’s a well documented story with ‘It’s a sin’ and expulsion from the Garden but it is only a story. It’s not real and hasn’t happened apart from in the Mind and has kept replaying over and over and over for an enormous period of linear time. Again not real. The original male and female separation within the Self is at the core of the imaginary dysfunction within 3D reality. IMO.